The Latino Action Network on Tuesday called for Perth Amboy City Council President William Petrick to resign over what the group says is a series of racist, sexist or homophobic Facebook messages the councilman has made since 2016.

“Petrick’s social media posts are uniquely insensitive to the community he is sworn to serve, the majority of whom are Latinos and immigrants,” said Christian Estevez, President of LAN. “The residents of Perth Amboy deserve better than a misogynistic, anti-immigrant, anti-Muslim hatemonger on the City Council.”

The posts, which were largely created by other sources and shared by Petrick, include one that shows a map of Haiti and the Dominican Republic along with a message about the two being “shithole countries.”

Perth Amboy is made up of mostly Latino residents, and many of those residents hail from the Caribbean.

“Petrick is taking a page from the Trump playbook, a playbook that seeks to divide people and divide our country,” Estevez said. “The Council President’s posts are not only demonstrably false and historically inaccurate, but they also perpetuate long debunked stereotypes about women and Latinos. 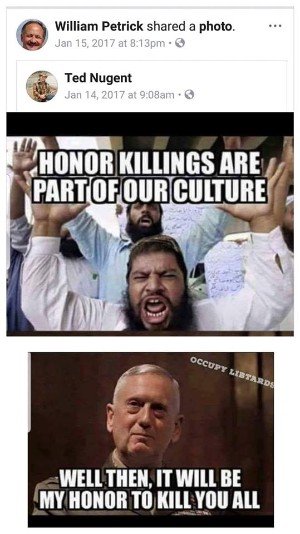