Going into this year’s midterm election, one of the biggest open questions in New Jersey politics was how the state’s new congressional map would hold up. Drawn by Democrats on the Congressional Redistricting Commission, the map aimed to make nine safe seats for Democrats, two (mostly) safe seats for Republicans, and one highly competitive district.

And based on Tuesday’s results, mapmakers got exactly what they wanted. Nine Democrats won by healthy margins, while a tenth – Rep. Tom Malinowski (D-Ringoes) – lost re-election in a seat that could very well flip back to Democrats in a future cycle.

That didn’t always seem like a guarantee; especially in month before Election Day, many Democrats fretted that they hadn’t shored up Reps. Andy Kim (D-Moorestown) or Josh Gottheimer (D-Wyckoff) enough to withstand a red wave.

But the red wave didn’t come, and even if it had, the strength of Democratic margins in key districts indicates that the congressional map would have protected the party anyways. In other words, the map seems to have been a success, and could continue to be one for years to come.

What the map was meant to do

When Democratic members of the Congressional Redistricting Commission were hashing out what would become the state’s new map in December 2021, looming large in their mind was the 2021 gubernatorial election, which had concluded a month earlier.

The suburban districts represented by Malinowski, Kim, Gottheimer, and Rep. Mikie Sherrill (D-Montclair) all voted for Ciattarelli by between six and 14 points. So when the mapmakers got to work, one of their top priorities seems to have been putting as many Democrats as possible in Murphy-won districts.

Gottheimer, Kim, and Sherrill were all given substantially redrawn districts, all of which had voted for Murphy and supported President Joe Biden by double digits in 2020. As a tradeoff, possibly to appease commission tiebreaker John Wallace, Malinowski’s 7th district was made more Republican, resulting in a probable 9-3 Democratic map.

When the map was approved, there was some discussion over whether it constituted a gerrymander. On one hand, it clearly favored Democrats and the commission itself seemed to be tilted in Democrats’ favor; on the other hand, it didn’t go nearly as far as it could have, and the choices made were arguably no less illogical than the ones made by the GOP commissioners who drew the previous decade’s map.

This year’s election won’t settle that debate, necessarily, but it certainly shows the robustness of the advantage Democrats drew for themselves.

What it would have taken for Republicans to do better

According to a tabulation from Monmouth University Polling Institute director Patrick Murray, Democrats are currently winning the overall House popular vote in New Jersey by around eight points, a number that could still change as remaining ballots are counted. That’s down from a 16-point House popular vote win in 2020, for an eight-point swing towards Republicans (though reduced turnout in heavily Democratic districts means the swing may be a little exaggerated.)

The Republican performance was enough to win the 7th district, as expected, but it still left them at a 9-3 deficit in the delegation overall. Gottheimer, Kim, and Rep. Bill Pascrell (D-Paterson), the state’s closest winners besides Kean, won by 10, 11, and 10 points, respectively. (The totals in Kim’s district could still shift after more votes are counted from Mercer County, where a voting machine glitch caused issues on Election Day.) 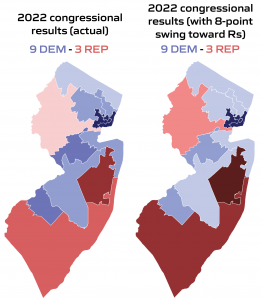 Now let’s say that, instead of losing the popular vote by eight points, Republicans had exactly tied Democrats statewide. Let’s also apply that swing uniformly to each district.

The ultimate breakdown of the delegation in such a scenario? Still 9-3. Gottheimer, Kim, and Pascrell would all face tight contests of between 2-3 points, but they’d win, locking Republicans out of all but three congressional seats.

In order to win a fourth seat, based on the 2022 results, Republicans would have needed to win the statewide congressional vote by two points or more, something that hasn’t happened this entire century. (They won by just over one point in 2010).

Of course, applying uniform swings to existing election results doesn’t necessarily tell you what would have really happened, since districts don’t always move in tandem with one another. If 2022 had been a red wave, some districts would have swung more than others, and there might have been unpredictable results in some places.

And coalitions can change over the course of the decade quite a bit, as New Jersey Republicans are well aware, so results this year aren’t perfectly predictive of future years. The 2018 blue wave that saw Democrats win 11 of the state’s 12 House seats happened on a map drawn by Republicans, after all.

But as things currently stand, Republicans would have to do unprecedentedly well just to win four out of New Jersey’s seats on the new map – a rough lot for a party that controlled half the state’s delegation a few years ago.

What future elections may have in store

Even predicting current elections is a dicey proposition, so any predictions of how New Jersey might vote over the next ten years should be taken with a massive grain of salt. That being said, the new congressional map’s inaugural performance provides some clues about where the battle lines in New Jersey might be this decade.

First of all, the obvious: the 7th district is going to be a swing district for the foreseeable future. If Kean had won by a landslide, Democrats might have backed off somewhat, but he didn’t, and his Biden +4 district is sure to host many more competitive races this decade.

On the opposite side of the ledger is Kim in the 3rd district. He faced a well-funded Republican opponent, Bob Healey, and members of both parties seriously thought he might go down; now, with a double-digit win under his belt, Republicans will have a tough time convincing anyone he’s seriously vulnerable.

The same can probably be said for Sherrill, Gottheimer, and Rep. Frank Pallone (D-Long Branch), though their Republican opponents this year had very little money, so the GOP hasn’t yet thrown the book at them the way they did at Kim.

Finally, there’s Pascrell, whose surprisingly close race against Billy Prempeh attracted little attention before Election Day. Pascrell’s 10-point margin was the second smallest Democratic victory in the state and represented a nine-point underperformance of Biden; he may have won by more if he’d taken the contest more seriously, but still, his Paterson-based district is worth watching as a potential weak spot in an otherwise sturdy map.

So where does that leave us? With one highly competitive district and a whole lot of Democratic-leaning districts that Republicans will have a tough time winning unless they have a superb cycle or their coalition shifts dramatically.

When he voted for the Democratic-drawn map over its Republican counterpart last December, John Wallace justified his decision by saying that Republicans had gotten to draw last decade’s map, so it’s only fair that Democrats got a turn.

His logic was roundly mocked (that’s not really how it works), but fair or not, Democrats took the chance he gave them and drew a highly effective map. This year’s election showed just how hard it will be for Republicans to break through – at least until it’s “their turn” to draw the map next decade.